Taking a look in to the history of Bournville Village Trust Area in Birmingham…….

Bournville, Birmingham, what does this name instantly bring to mind……. CHOCOLATE!!!

Delve into the fascinating history of this area in Birmingham and you will discover how the makers of chocolate, George and Richard Cadbury moved their factory from the City of Birmingham to the healthier environment of the countryside. They chose the Bournbrooke  Estate, a source of clean water from the nearby River Bourne.  The Transport links were good and with only four miles from the city of Birmingham the air was cleaner and healthier.

They completed the move in 1879 and named it Bournville and adopted a French sounding name as they considered France had such a reputation for good food and hoped that this would improve their chocolate sales.

George Cadbury was disgusted at the living conditions for the working classes.  He had a vision to provide decent housing for his employees, providing housing with gardens and with open spaces for recreation and leisure.  Originally sixteen decent sized cottages were constructed for key workers and in 1895 additional land was purchased and the Bourneville Building Estate was born.  Rules were put in place then, that no house was to occupy  more than a quarter of its building plot, and each garden was no less than a sixth of an acre, planted with at least six fruit trees.  This was in the hope that workers could grow and benefit from fruit and vegetables in their own gardens.

By 1905, 315 houses were built, and by 1906 another 398.   In 1913 a model garden suburb for white collar workers was added.  The 1920’s and 1930’s saw rapid expansion with the various co-operative societies and private arrangements.  In the 1930 ‘s “sunshine homes” were built, constructed to catch the maximum amount of sunlight and from 1950 -1962 the Trust and Birmingham city housing planned a new development, with shops and churches. The 1960’s and 70’s saw additional developments  with many special needs schemes taking  place, houses were build for the  elderly and for the blind.  Every type of housing has been constructed in Bourneville Birmingham.  From self build, nursing homes, single person apartments, almshouses, housing co-operatives and low cost ownership.  Allotments have been provided to enable residents grow their own produce, which has seen an increase in demand with people living in apartments.  There is an exception, there are still no pubs or off licences today!! The idea was to create a traditional English country village with its communal buildings grouped around a village green.

If you live in the Bournville Village Trust Area and would like to do some house improvements it is best to check the Bournville Design Guide; https://www.bvt.org.uk/wp-content/uploads/2010/10/BVT_Design_Guide_2011.pdf as most improvements will need Trustee Consent.

An application will need to be made to the Trust with the relevant plans and fee, then the Trust will consider your proposal within the 6-8 week consultation period.

All loft conversions in the Trust Area will need consent and need to be kept in keeping with the estate guidelines. Small pitched rear dormers are preferred and roof lights are to be kept to the rear as they will not normally be permitted on front or side elevations.

In the trust Area there are two Conservation Areas. If any building works is required in these areas, not only do you need to apply for Trustee Consent but also you need to submit a Planning Application to Birmingham City Council to gain Planning Permission.

We recently completed a loft conversion in Heath Road South, Birmingham in which it created a spacious bedroom and en-suite. Our clients kindly allowed us to take some photographs of it completed, its been finished to an exceptional standard with great taste in the interior design. 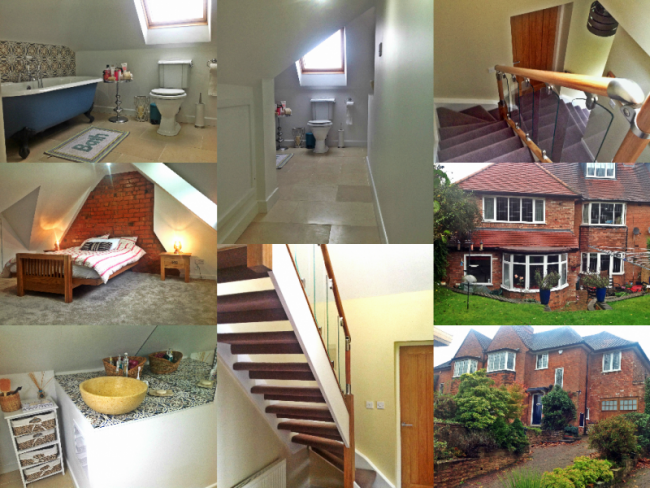 This article was written on behalf of Buckley Loft Conversions by Rita Davies and Rachael Nolan. For more information on converting your loft in Bournville Village Trust Area, visit our Birmingham Loft Conversion Page>

Centrally located in Cannock, Staffordshire, Buckley Loft Conversions is ideally placed to develop loft conversions across the West Midlands. For more information see the pages below.